When four college friends formed the Brown Sugarettes Mastermind Group, they had very different goals—but matched each other in ambition. Yet ten years later they can't help wondering what happened to the hopeful, confident, driven women they used to be—and how to get them back.

After Rory's stepfather is involved in a tragic car accident, the lives of Rory, June, and Vivian become inextricably bound together. Rory discovers photography, begins riding more competitively, and grows closer to gorgeous, mercurial Vivian, but despite her newfound sense of self, disaster lurks all around her: in the parched landscape, in her unruly desires, in her stepfather's wrecked body and guilty conscience. One night, as the relationships among these teenagers come to a head, a forest fire tears through the canyon, and Rory's life is changed forever.

The Poet of Tolstoy Park by Sonny Brewer

"The more you transform your life from the material to the spiritual domain, the less you become afraid of death." Leo Tolstoy spoke these words, and they became Henry Stuart's raison d'etre. The Poet of Tolstoy Park is the unforgettable novel based on the true story of Henry Stuart's life, which was reclaimed from his doctor's belief that he would not live another year.

Every Drop of Blood by Edward Achorn

By March 4, 1865, the Civil War had slaughtered more than 700,000 Americans and left intractable wounds on the nation. After a morning of rain-drenched fury, tens of thousands crowded Washington's Capitol grounds that day to see Abraham Lincoln take the oath for a second term. As the sun emerged, Lincoln rose to give perhaps the greatest inaugural address in American history, stunning the nation by arguing, in a brief 701 words, that both sides had been wrong, and that the war's unimaginable horrors—every drop of blood spilled—might well have been God's just verdict on the national sin of slavery. In indelible scenes, Achorn vividly captures the frenzy in the nation's capital at this crucial moment in America's history and the tension-filled hope and despair afflicting the country as a whole, soon to be heightened by Lincoln's assassination. His story offers new understanding of our great national crisis, and echoes down the decades to resonate in our own time.

Boris Morros was a major figure in the 1930s and '40s. The head of music at Paramount, nominated for Academy Awards, he then went on to produce his own films with Laurel and Hardy, Fred Astaire, Henry Fonda, and others. But as J. Edgar Hoover would discover, these successes were a cover for one of the most incredible espionage tales in the history of the Cold War—Boris Morros also worked for Russian intelligence.

On the Horizon by Lois Lowry

Why We Keep Clean by Rosalyn Clark

*Summaries of books courtesy of Overdrive*

Posted by Brooke County Public Libraries at 9:00 PM No comments:

Email ThisBlogThis!Share to TwitterShare to FacebookShare to Pinterest
Labels: eBook 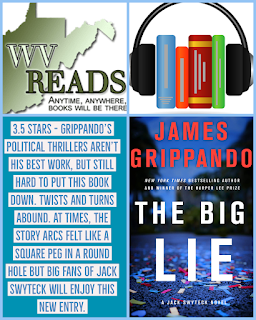 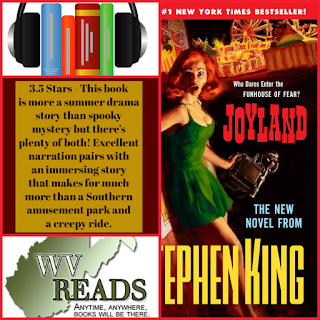 Posted by Brooke County Public Libraries at 7:56 AM No comments:

Email ThisBlogThis!Share to TwitterShare to FacebookShare to Pinterest
Labels: eAudiobook

Do you enjoy browsing the new sections of materials at either location?
Do you want to know what comes in weekly?
Do you have an email?
If you answered yes to all of the questions above, then we have something for you!
Sign up today to received weekly emails from us regarding the new items that the Brooke County Public Libraries have added to their collection.
Just visit their website here, type in your zip code, and it should pull us up!

✓ Wildly convenient - view it from home

Posted by Brooke County Public Libraries at 7:10 AM No comments:

Email ThisBlogThis!Share to TwitterShare to FacebookShare to Pinterest
Labels: Wowbrary 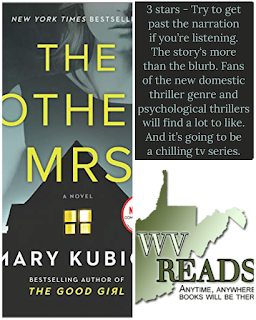 Posted by Brooke County Public Libraries at 6:54 AM No comments:

Email ThisBlogThis!Share to TwitterShare to FacebookShare to Pinterest
Labels: eAudiobook 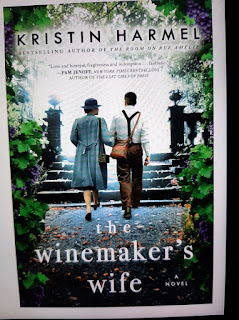 The Winemaker's Wife
Kristin Harmel
A very captivating read, based on well researched world events. While it is fiction, the persons and events are true to what probably happened more than once in the eras it covers. Hard to put down..really draws you in so you want to know what happens next.
(BJ)
Posted by Brooke County Public Libraries at 7:26 AM No comments:

Email ThisBlogThis!Share to TwitterShare to FacebookShare to Pinterest
Labels: Book 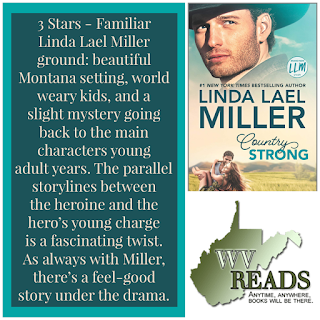 Country Strong
By Linda Lael Miller
Release Date: January 20, 2020
EBook Review - Available from WV Reads
https://wvreads.overdrive.com/media/3566750
3 Stars - Familiar Linda Lael Miller ground: beautiful Montana setting, world weary kids, and a slight mystery going back to the main character's young adult years. The parallel storylines between the heroine and the hero’s young charge is a fascinating twist. As always with Miller, there’s a feel-good story under the drama.
Nothing grabbed me like her ‘Big Sky’ and ‘ Marriage’ series. Seemed to lack the usual heart. I noticed a slip in writing style. Sentences that seem rambling. A teen who says yokels and saloon. Sometimes like the time period was a bit undecided. Cord’s a likable hero, devoted to his ranch work and idea of finding the right girl. But not much distinguishes him from other cowboy heroes except maybe bad taste in women. Shallie, our heroine, is more memorable, with her books, overcoming her past, and her crush on Cord. However, these two don’t share a page until a quarter of the book goes by. There’s so much going on outside of their story.
And unfortunately, the gist of the story feels told by the halfway point. Also, I have issues when young people show up with so much resentment toward fathers who clearly didn’t know they existed. I find it especially exhausting in fiction. How was a dad supposed to know you needed him? A sixth sense? Maybe a dream? The unknown father part adds some spice to the story. At the same time, the girl’s attitude at parts of things grated on me. Shallie’s search for family comes off more heartfelt than her counterpart. There was more sunshine than storms in here though, like the dogs Smoky & Bandit, country music, talks of tattoos, outdated kitchens, and Cord and Shallie’s reconnection. If you enjoy modern western romance with a little mystery, this is a good pick. But if you’re looking for knock your-socks off, look elsewhere.
(NS)
Posted by Brooke County Public Libraries at 7:24 AM No comments:

Email ThisBlogThis!Share to TwitterShare to FacebookShare to Pinterest
Labels: eBook 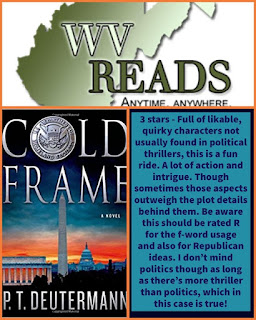 3 stars - Full of likable, quirky characters not usually found in
political thrillers, this is a fun ride. A lot of action and intrigue.
Though sometimes those aspects outweigh the plot details behind them. Be aware this should be rated R for the f-word usage and also for Republican ideas. I don’t mind politics though as long as there’s more thriller than politics, which in this case is true!

While conservative voters in this hot election year climate will probably find more to like than those with more liberal leanings, there’s more to the story. Our main character Av is just a stubborn cop with the (typical) penchant for getting weird cases and being accused of an authority problem. But his point of view is pretty fun, to say nothing of his crazy coworkers. And narrator Dick Hill does a great job with different voices and tones for all the characters. Av’s personal life has just enough detail where we can picture him in the real world with us. But he stumbles upon an exciting possible conspiracy where some of the Washington elite keep popping up dead.

I honestly didn’t find this to be the kind of mystery/thriller where I was keeping score or guessing who was up to what. I was just enjoying the fast pace and sinister vibe. Some of this story is pretty dark but no less scary than the news of late.
While this was written in 2015, I didn’t think it felt that dated. For those of you who liked the Cam Richter series by Deutermann, you will see a few enjoyable similarities but this is definitely a change from his other books with all the Washington atmosphere at times. Finally to say,
the ending was intense but fairly strange. If you consider robots and killer plants weird. Somehow it worked out okay for me. 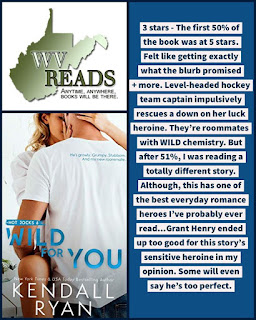 3 stars - The first 50% of the book was at 5 stars. Felt like getting exactly what the blurb promised + more. Level-headed hockey team captain impulsively rescues a down on her luck heroine. They’re roommates with WILD chemistry. But after 51%, I was reading a totally different story. Although, this has one of the best everyday romance heroes I’ve probably ever read...Grant Henry ended up too good for this story’s sensitive heroine in my opinion. Some will even say he’s too perfect.

He offers her a room for free. Instead of offering to chip in, she picks the worst time to up and spread her wings. Ana doesn’t exactly rush into a fling with Grant. But while he is cautious yet devoted in their relationship, she is reckless and distant the majority of the time. And the suspense angle with her ex is out there as a potential plot device that’s never really used. It also lacks some of the hotness factor of many of Kendall’s prior works.

Spoilers ahead!!! There’s no way to avoid them... Grant basically tells Ana he will love her and protect her no matter what. He doesn’t care if her baby is his or her ex’s. And Ana runs away. Suddenly she needs to prove she can do everything by herself. Girl, the ship has sailed as they say. I think it was an effort to redeem

Ana as an independent, willful character but the effort falls flat. She was more likable as we rooted for her to find her way out of her terrible relationship and accept the help we all need sometimes. The pregnancy storyline could have been entertaining but it left so much to be desired.And that ended up being the entire plot of the second half, not them falling in love or avoiding her ex.

Posted by Brooke County Public Libraries at 7:21 AM No comments: