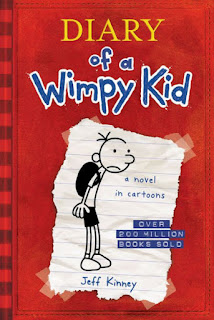 Looking for a quirky and fun series for young readers? This month we've got a great pick at Brooke County Libraries! We're featuring the Diary of a Wimpy Kid series this November, written by Jeff Kinney.
Filled with laugh-out-loud hilarious text and cartoons, the Diary of a Wimpy Kid series follows Greg Heffley as he records the daily trials and triumphs of friendship, family life and middle school where undersized weaklings have to share the hallways with kids who are taller, meaner and already shaving! On top of all that, Greg must be careful to avoid the dreaded CHEESE TOUCH!
The first book in the series was published in 2007 and became instantly popular for its relatable humor. Today, more than 250 million copies have been sold around the world! 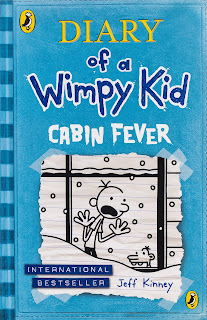 The Diary of a Wimpy Kid series has been a permanent fixture on the USA Today, Wall Street Journal, and Publishers Weekly bestseller lists. The series has remained on the New York Times bestseller lists since the publication of the first book, for more than 775 weeks total, and more than 350 on the series list. The books are currently available in 79 editions in 65 languages.
Since initial publication in 2007, the series has gone on to win many regional and national awards around the globe including two Children’s Choice Book Awards and six Nickelodeon Kids’ Choice Awards for Favorite Book. Jeff Kinney was also named one of Time magazine’s most influential people in the world. 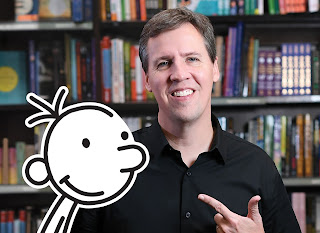 Diary of a Wimpy Kid author Jeff Kinney didn’t grow up wanting to be a children’s author. His dream was to become a newspaper cartoonist but he wasn’t able to get his comic strip syndicated.
Jeff Kinney was born in 1971 in Maryland and attended the University of Maryland in the early 1990s. It was there that Jeff ran a comic strip called “Igdoof” in the campus newspaper. He knew he wanted to be a cartoonist.
However, Jeff was not successful getting his comic strip syndicated after college, and in 1998 he started writing down ideas for Diary of a Wimpy Kid, which he hoped to turn into a book. Jeff worked on the book for six years before publishing it online on funbrain.com in daily installments. 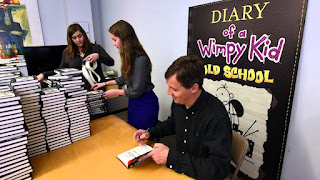 In 2006, Jeff signed a multi-book deal with publisher Harry N. Abrams, Inc. to turn Diary of a Wimpy Kid into a print series. The first Diary of a Wimpy Kid book was published in 2007 and became an instant bestseller. Just a year later, more than 100,000 copies were in print in the United States alone. With each subsequent book, in-print numbers continue to grow exponentially both in the U.S. and abroad. There are now more than 250 million copies of the series in print worldwide. 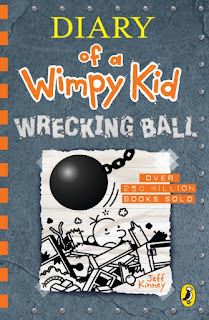 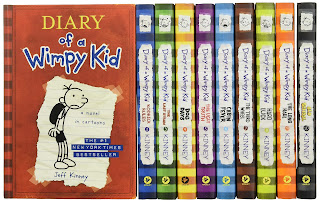 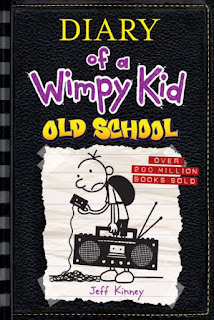 Interested in giving this series a try? Check out the titles we have available from WV Reads!
https://wvreads.overdrive.com/search/series?query=Diary%20of%20a%20Wimpy%20Kid&sortBy=newlyadded
Don't forget to check in next month, readers! We've got one more young reader spotlight to share before 2022 is over.
Are you a big fan of the Wimpy Kid adventures? Maybe you know of a similar series for middle schoolers? Let us know in the comment section below or on any of our social media pages!
Images and info are courtesy of WV Reads, Goodreads, Google, and author webpages.
Posted by Natalie Staff at 5:00 AM