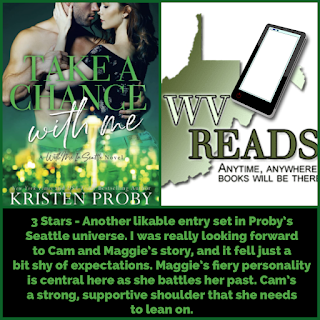 Take a Chance with Me
By Kristen Proby
Release Date: January 25, 2022
Ebook Available from WV Reads!
https://wvreads.overdrive.com/media/6436009
3 Stars - Another likable entry set in Proby's Seattle universe. I was really looking forward to Cam and Maggie's story, and it fell just a bit shy of expectations. Maggie's fiery personality is central here as she battles her past. Cam's a strong, supportive shoulder that she needs to lean on.
There was so much build up to Maggie's story in her branch of the Seattle families. And I was ready to devour her and Cam's book. Proby oddly didn't work any suspense and only a little steam into this one. She chose instead to highlight Maggie's struggles since getting out of an abusive marriage, and her lifelong friendship with Cam that becomes more. Cam's more patient with her than I could have probably been to be honest. But these two did have a lot of chemistry and a beautiful relationship with her family.
I felt like this one just wasn't as tightly plotted and had some tropes I generally don't enjoy. Cam is Maggie's much older brother's best friend, and while I was buying Maggie's crush on him, I couldn't see Cam's side as much. Maggie's almost too indecisive and capricious. I can understand her reluctance to change and commitment but frankly, her life was shaped by her own bad choices so. There's a really weird aspect of the plot involving money left behind by her husband. Cam's got secrets that are left really, really vague. I feel like Proby should have doubled down somewhere to up the excitement levels a little. Either they have a secret passionate affair or end up in danger from one of Maggie's beau's lifestyle choices. This one was definitely entertaining though, slightly saucy but mostly sweet. Just felt like a bit was left on the table.
(NS)
Posted by Natalie Staff at 3:30 AM